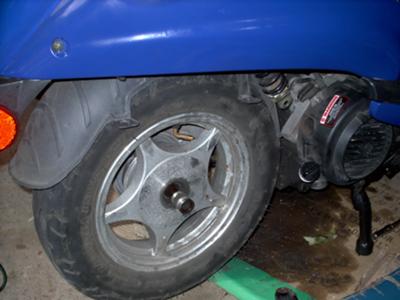 We're Getting Closer to Pulling The Wheel 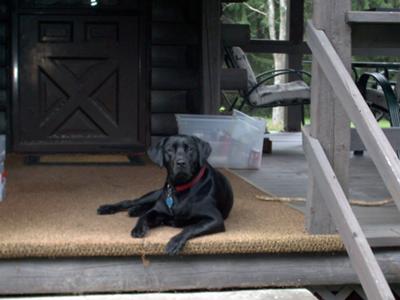 Satisfied, My Inspector Relaxes While The Work Proceeds

I've been busy the last week and a half working on the Milano, doing routine and not so routine maintenance. It recently developed an oil leak so I always figure you should start at the last thing you touched, which was the valve cover.

That meant stripping off all the plastic panels, removing the battery and the floorboard. Basically doing the valve adjusting job over, except for adjusting the valves.

Fortunately my local NAPA had o-ring material to replace the gasket and I had the job done in the usual four hours. No disasters to overcome this time and the weather was only slightly warm. It's still leaking oil though, so I'll have to investigate other areas for the source.

The next day, I changed the oil in the engine and drive gears. There's nothing like having nice, hot oil pour all over your hands when you unscrew the drain plug. I know what a french fry must feel like. Not to mention that I somehow can't get my tools from feeling slippery not matter how many clean rags I rub the socket and wrench with.

Hot oil seems to bond with the metal unless you rub it on your clothes. Then it comes off just fine. All the oil looked good, which was heartening. No metal pieces or chunks of foreign matter that people occasionally find in Chinese scooters.

Yesterday I replaced the original rear tire after 3,000 miles. Not great, but not bad for Chinese rubber, especially as badly mounted as mine was. It was placed on the rim out of round and wore bald in one spot but still had some center tread showing in another. Something to look for if you're reading this and just bought a Chinese scooter.

If I had been more diligent when I bought mine, I would have seen it, loosened the bead and re-inflated the tire in an attempt to seat it properly and gotten a few more miles out of it.

The job itself was about as grimy as you'd expect, the dirt under your fingernails type, but I was surprised it went as well as it did. I bought an electric impact gun some months back for jobs like this and it made removing the rear wheel nut a breeze. Just pull the trigger and off it came without having to hold six things at once like you usually do when you don't have instant power to unbolt with.

Now I have to schedule a State vehicle inspection for it. It's good to go.

Join in and write your own page! It's easy to do. How? Simply click here to return to eScooter Club Updates - Jim Zeiser.