You Never Forget Your First Time 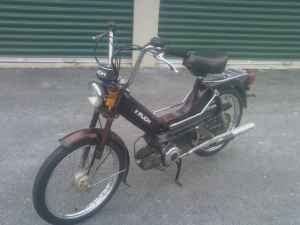 When I was about twelve years old my mother bought a brand new Puch Maxi moped. I still remember the burgundy color of it and the leather seat, which was much bigger, softer and more comfortable than the seat on my bicycle.

I wasn't allowed to ride it, of course, as I could barely reach the ground when I sat on it. The riding privilege was extended only to my older brother, who rode it everywhere.

But I knew I'd get to ride it eventually. After all, since when did what you were allowed to do get in the way of what you wanted to do. Boys will be boys.

Naturally, I found a way to talk my big brother into letting me ride the moped and seem to remember that it didn't take much effort. I probably had to give him something or promise him something in exchange for the experience. The sibling bartering system was heavily employed during our childhood.

I had spent the last six years on a single speed bicycle and was indelibly impressed the first time I rode the motorized Puch. By today's standards it wasn't very fast – maybe 30 MPH top speed, but when compared to my single-speed bicycle it might as well have been a rocket ship.

My first ride happened away from spying eyes – down by the water works in Haddonfield, New Jersey. It was a private, secluded kind of place where kids could go to hang out, away from parent's spying eyes and peace-loving neighbors. Simply put, it was where we went to raise hell.

"Now don't go too fast, all right?", my brother warned me.

Naturally, the first thing I did was to roll the throttle all the way back hitting the top speed within a short six or seven seconds.

The water works was not the best-maintained spot for such things. The concrete was old and broken in many places, jutting up at harsh, scary angles. It was when I slowed to make a turn that I discovered why broken concrete was a bad thing when your bike has a motor.

When the rider's weight is only about 75 pounds, you don't command a lot of authority or control over the machine. So, down went the shiny new Puch, and down I went with it.

Nothing too serious, just a few scratches on the outside of the left pedal and on the handlebar... and the side of the seat... and the front fender... all minor scratches, fortunately. I had a few bumps and bruises but from that moment on I was hooked.

The next summer I was thirteen and the Puch was transported to my grandparent's shore house in Avalon, New Jersey. For some reason, now that I had reached the magical age of thirteen, I was allowed to ride the moped. I think those might have been the best two weeks of my childhood. Every day, as much as possible, I would roll back on the throttle and cruise, full-speed up and down the street to the yacht club at the end of the road.

A few weeks later the Puch was stolen right out of the garage. That, as they say, was that.

But I never forgot the thrill of riding that motorized rocket-bicycle. Years later, at the tender age of about twenty-six, while living near Asheville, North Carolina, I purchased my first motorcycle.

At the time I was the parts manager for an R.V. dealership and was surrounded by hard-drinking, chain-smoking, off-roading hooligans who spent all their leisure time being everything but leisurely. They convinced me to buy an "enduro," which was a motorcycle legal for on or off-road use. It was basically a motocross bike with lights, turn signals and a license plate. It was tall, burly and it scared me. A lot.

Learning to ride that beast was nothing short of trial-by-fire. My very first ride was in the backwoods, on the side of a mountain, through 3-foot deep water, over boulders the size of cars and around dirt trails that were so overgrown, northerners would never call them trails. It wasn't so much motorcycle training as it was fear training. Luckily I had more than enough fear to keep my Yankee ass alive to ride another day.

A few weeks after my initiation into Club Redneck, one of the guys, an accomplished motocross rider, while riding the same trail, had an accident that destroyed his knee. It required multiple surgeries and left him with a lifelong limp. That was enough reality to take the shine out of a diamond, so I decided to sell the bike. Trail riding was not for me.

It took another ten years before I got back on a motorcycle, but in the spring of 2008 I bought a Yamaha c3 scooter. Okay, not quite a motorcycle, per se, but it's a start. It was the drastic increase in gas prices that motivated me back onto two wheels.

My Yammi gets over 100 MPG on a bad day and as much as 116 MPG on a good day. I ride this little scoot everywhere, including the seven miles to work. It even has enough storage space under the seat to do light grocery shopping! So now the '07 Honda Civic I bought last year just sits in the parking lot, reserved for rainy and/or cold days or for occasional trips to Home Depot.

Since my first time riding as a child, I have matured just a bit. The state of Pennsylvania footed the bill for a safety course offered by the Motorcycle Safety Foundation. I spent ten hours in the classroom and ten hours on a motorcycle being coached on proper, safe riding techniques.

At the end of the course I received an endorsement on my regular driver's license which allows me to legally and safely ride any motorcycle I desire.

But the best part of the lifelong journey was the rediscovery of the thing that stuck with me all these years: the sense of freedom and connection that you can only feel on a horse or a motorcycle. When you're riding you can smell everything, see everything and feel the ground move beneath you. The sound of the wind and the world moving past you reminds you that you're definitely going somewhere, even without a destination in mind.

As a child I rode my bicycle just to ride. I think that's what it's about for me as a thirty-something in this modern world of non-stop bills, aging, troubles and stress: remembering how to experience and enjoy the journey, without worrying about the destination.

So remember, as the leathery, veteran Harley riders like to say: keep the rubber side down and the shiny side up and just enjoy the ride.