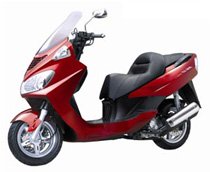 It has 12" tires with all disk brakes and a 3 gallon gas tank. It has nice storage underneath the seat. It has a nice bright headlight and a big taillight in the rear.

It's a medium sized scooter and I have gotten up to 70 mph and 65 mpg. Presently, I have 24,000 Km on it. At 23,000 Km the carburetor went bad (which can happen) and dumped raw gas into the cylinder and ruined the valves. I had the engine rebuilt at a cost of just under $800. The carb was an odd size and I had to use Daelim's carb. nothing else would fit.

The scooter cost me $3300 to buy including tax. I replaced the rollers for the CVT; it was time to change them at 23,000 Km and I also had to replace the rear master cylinder to pass inspection for 2010. This engine is of better quality than the Chinese engines.

I ride this scooter year round even in the winter months. Yes, I do wear leather chaps to keep my legs warm. It's a blast to ride! I take it on the highway during light traffic. It doesn't have the power to pass cars on the highway. The car drivers here are nuts!

I have ridden this with other motorcyclists all over the place and they're impressed with this scooter. There is also a 250cc version of the S2. Same frame and plastic, but a bigger engine, rear tire and suspension.

I bought a tall windshield for it and it keeps the wind off of me and keeps me warmer, when it's cold. It didn't come with a rear rack so I designed one and had it made out of stainless steel and I put a 45 Liter Givi box on it. I can now do grocery shopping with it.

This is a great scooter for city or rural traffic. Where I live, I have both kinds of traffic. It will carry two people.

This winter I had to put Startron additive into the ethanol gas. The engine is hard to start when the temp goes below 50 degrees. I switched over to non ethanol gasoline and the engine starts right up and holds an idle. I let the engine idle for 5 mins. to heat it up and it's ready to go. It has been a BIG improvement with the non ethanol gas for the cold weather.

There is another business that stocks parts (not plastics) for dealers only. I usually go thru Mr. Lee's Bike shop in JeJu Island, S. Korea for parts. He can get me ANY part I need and he sends it quickly when payment has been made.

When the US economy crashed a couple years back; Daelim stopped shipping scooters. The US Market dried up; which is understandable. I don't know when they will start shipping them again to the US. They started to ship some of their scooters to Canada again last year (2009).