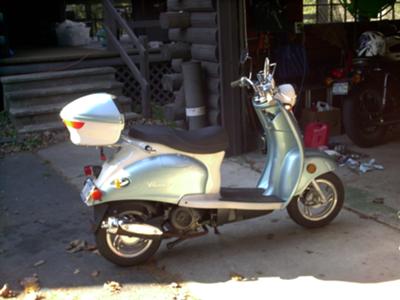 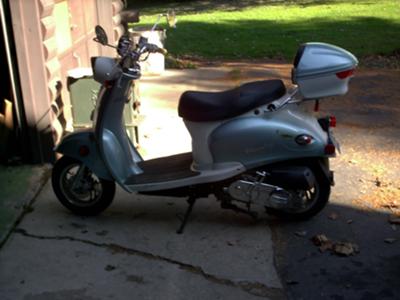 See the burn mark on the fender-OOPS

The Craig's List ad said "2008 Lance Charming 50cc, 900 miles, can't get it started, $260." After answering all the people with their starting problems here, I just couldn't resist the challenge.

I felt that even if it wasn't anything I could use, I could always sell it after I fixed it. After all, what was I going to do with another two wheeled conveyance?

The scooter came with the usual sad story. At about the time you should adjust the valves, it started stalling on the owner at every traffic light. Then he took it to a "mechanic" who assured him it needed a carburetor and now it wouldn't run at all.

The owner was selling it for about one-fourth what he paid for it just to get rid of it. Once home, I dove in to do the valve adjustment and say objectionable things about scooters and their plastic panels.

After digging my way down to the motor, I found the valve clearances to still be within the tolerable range. Hmmmm.

I attacked the carburetor next, putting the original carb back on, but it still wouldn't start. New carb back on and still nothing. Then I thought of my dark past.

When I worked on two stroke engines, we always put in new spark plugs – no matter how good the spark looked with the original plug. Don't you know it started!

I even took it for a short ride...and it died. Three plugs later, I stumbled on to the fact that the plug for the CDI was somehow responsible and tugged and twisted it and now it runs-sort of.

It has to be kept at a high idle or it dies, which points at fuel or electric issues. When the weather gets more favorable, I'll change the CDI and dig at the fuel line of the carb.

For the money though I have a running scooter with less than a thousand miles and I only almost set it on fire once.