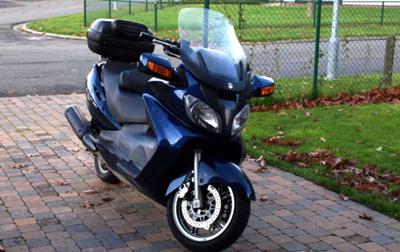 I've read the other reviews of the Suzuki Burgman 650 scooter and I only can agree with what my colleague Suzuki riders wrote down.

For me, it's my 18th bike after a lot of motor bikes, 5 x BMW, a Moto Guzzi California EV, Honda Varadero XL1000, etc. I'm living in Belgium (Europe) and here a scooter nowadays isn't accepted by the real bikers, although in France, Italy, Croatia and other south European countries, the scooter is very popular.

Here in Belgium and the Netherlands, there is still a little change going on, more and more scooters on the road. I'm 51 years old and like me, more and more people see the advantages of a motor scooter.

I'm very happy with my AN650. I would not say it's the best machine of the world, but it comes very close. :-) I'm mostly on the road with a pillion (passenger - my wife Patricia).

Cornering, curves, small roads, highways are all easy to handle. From 0 to 100 KM/hour in 7.5 seconds also isn't bad. The fastest speed I've driven was 170 KM for a very short while, this just as a test. Keep in mind that the Suzuki was not yet on is top speed and still very stable; in fact, it's too easy to ride on the illegal side of the law!

The speedometer is a little bit of a liar too... too optimistic... when I drive 130 KM/H on the speedo, it's according to my (TomTom Rider II) GPS 120 KM/H, and yes, believe me when I'm say the GPS tells me the truth.

The KM counter lies also a bit. Let's say more or less 4 percent. Thus, keep in mind that most reports regarding gas consuming are a little bit too optimistic too; my average consuming is 5.4 L/100 Km by a rather normal driving style with pillion.

The most fun I've had is when I'm chasing a regular motorcycle on a curving road while the biker tries to ride away from me! In his mind, it can not be the case that a Stup... scooter can follow or even overtake him.


When you're done here, you may also be interested in reading some of these popular pages: