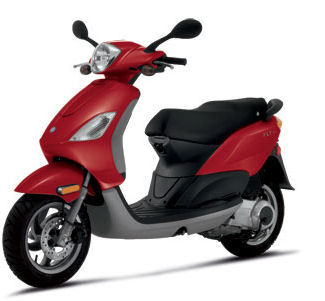 Picture of the Piaggio Fly 150

Here is my Piaggio Fly scooter review... I lived in Bermuda for a year and while I was there my boyfriend and I had a Piaggio Liberty scooter, which I LOVED AND ADORED almost as much as I wanted a Vespa scooter (only I couldn't afford one).

Anyway, when we came back home we realized we really missed our scooter, so we bought the new Piaggio Fly with a 150cc, which I am also equally, if not MORE in love with. I'm not usually a driver, but a passenger most of the time, but I can say that it's a nice smooth ride and is perfect for local commuting.

My boyfriend is a bike mechanic by hobby, so he insisted on getting a new pipe for it to give it some more power, which we did and it's got a quicker pick up to it now. I couldn't care less about the additional noise and would have stayed with the original pipe, but everyone who likes bikes and scooters enjoys the added purrrrring

He also is the type to prefer shifting bikes, but since I don't shift we chose the Fly and he tells me all the time he doesn't know why he loves this scooter so much because he usually hates automatics- clearly this says something about how awesome our little scooter is!!!

A few things I like... the Piaggio Fly isn't too heavy, like the BV250 (one we were also looking at), which is important when a small person like me handles a bike. I like to know I can pick it up if I slide out and I also like knowing I won't look like an idiot trying to lunge my body weight into it to get it off the kickstand!!!

The Piaggiio Fly is not too bad on the wet roads when it rains; I don't get much sliding or skidding, just really wet! So make sure you pack those rain jackets!

I'm also known for carrying way too much stuff on the bike with me so the added compartments are nice to have. Also, the price on the Piaggio Fly is affordable compared to the other bikes we were looking at and it's AMAZING on gas, which makes our lives even better.