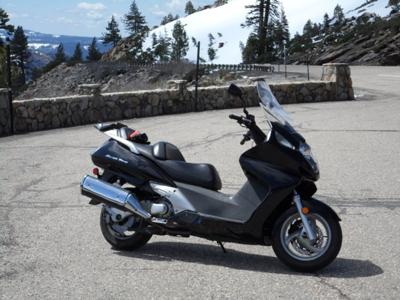 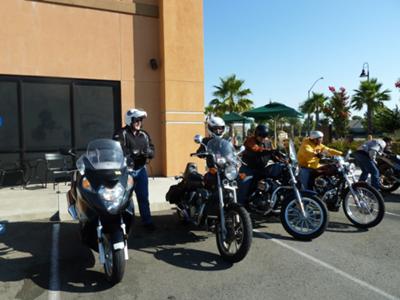 Silverwing on left prior to church motor crew run up the Feather River Canyon, northern California

I converted to the Honda Silverwing from a Kawasaki Vulcan cruiser in January 2011. I bought the Silverwing used from a local dealer. It had 22K miles on it and the previous owner was meticulous about maintenance. It was well cared for.

This is the first scooter I've owned. I decided to go with a maxi-scooter because I was tired of lugging a cruiser around, liked the auto transmission idea and wanted something that handled better, since a lot of my riding is on surface roads in the local mountains.

Riding the bike took a bit of getting used to... less gyroscopic effect due to the smaller wheels, no gas tank between the knees and less clutch friction zone control for low-speed maneuvering. Now that I've been riding it a bunch, I've learned to control the clutch engagement at low speeds with the rear brake and to trust those little wheels... they work great. I've also learned you can hang a knee off the bike and it responds great to that technique in the twisties.

OK, enough about the transition... some comments about the bike. The Silverwing is capable of speeds to 100 mph or more. I've had it to about 80-85 to pass slow traffic on the highway... the parallel twin engine makes about 50 hp and makes plenty of power. The bike is pretty light, but still pretty stable on the freeway.

The stock windshield sucks on ice, so I replaced it with a Givi Airflow, which works great. MRA also makes a nice windshield with an adjustable wing on top.

Storage space is great... when I pop the seat open, my motorcycle buddies are envious, because I keep a gear bag carrying tools, jumper cable, tire repair kit, air pump, Bible, books, baseball hat and other stuff under the seat and it's all locked up when I walk away from the bike.

The Silverwing handles the twisties really well. The seat's OK for about 2 hours, but after that, terminal monkey-butt starts setting in... I'm researching how to resolve that. Fuel mileage is about 45 mpg if I hold the bike at 70 mph or below, but goes down to 40-42 if I cruise at my preferred speed of about 75 mph.

I really like the Silverwing and find that I ride it way more often than I ever did the Vulcan... it's more fun and more practical... but if motorcycling is an ego deal for you, just a word to the wise... there ain't a lot of respect for "scooter" riders out there... so ride your ride and be happy with your adventures... don't depend on others for your gratification.