Gas Powered Scooters Are the Standard

Gasoline scooters, gas-powered scooters, gas motor scooter – these are all ways of describing the same thing... a scooter that uses gas as its fuel.

The majority of motor scooters on the road in the US and Canada today are the gas powered scooters. This means they run on gas, whether regular unleaded gas or the premium variety. This is in comparison to the 4-wheeled mobility scooters you see elderly and disabled people using at Walmart and other places or even some "new-fangled" electric motor scooters you may find on the road.

The great thing about gas scooters, though, is how fuel-efficient they really are. My little Genuine Buddy gets around 80 MPG and that's right in the average range of 60 to 120 MPG.

When's the last time you got that kind of mileage out of your SUV? Or even your little sedan or hatchback? Never, I'm guessing...

Gas powered scooters generally have small tanks, but it doesn't really matter, since you'll still only have to fill up once a week or less, depending on how much and how far you ride. And you wouldn't believe the high you get when you pull up to a gas pump on your gasoline scooters and only have to pull a couple of dollars out of your wallet, rather than a $50 bill.

Two-Stroke Motors Were the Original... 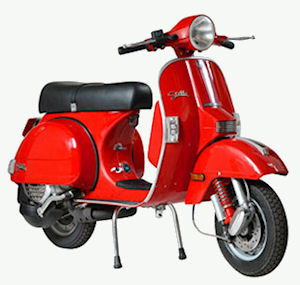 Traditionally, gasoline scooters had what is known as an air-cooled "2-stroke" cycle engine. Two-stroke engines complete a process consisting of intake, compression, combustion and exhaust in only two strokes of the piston rather than four. This is accomplished by using the beginning of the compression stroke and the end of the combustion stroke to perform the intake and exhaust functions, which allows a power stroke for every revolution of the crank.

For this reason, two-stroke engines have often been used when portability and light weight are advantageous, such as in chainsaws and outboard motors... or scooters. 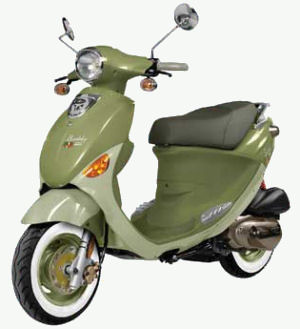 But the downside of 2-stroke engines is that they tend to have high pollutant emissions. For that reason, 4-stroke engines are more common in newer, more modern scooters, because they pass emissions standards more easily, an important factor in the US.

Some gasoline scooters today have water-cooled engines, such as the Honda FC50 or the 2002 Yamaha YQ50s.

Another way to reduce emissions is by using a scooter that is an LP gas-powered scooter. LPG scooters use a fuel called autogas, that is actually liquefied petroleum gas. LP gas scooters are increasing in popularity throughout mainland Europe and Great Britain.

The moped varieties are readily in use in China and many parts of Southern Asia, where they enjoy an urban cult following due to traditional styling, ease of use and fuel efficiency. In fact, some large cities such as Shanghai have completely banned regular gasoline scooters from being used, in favor of the LPG scooters.

Gasoline scooters are the standard in the US, though electric scooters may eventually gain some traction. You can't beat the fuel-efficiency, dependability and affordability of a gas-powered scooter.

Related Pages in This Section