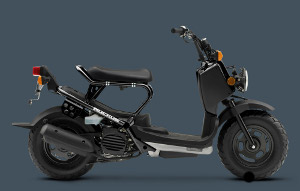 My official opinion of the 2010 Honda Ruckus 50cc scooter is, "come on, Honda, are you kidding me... an MSRP of over $2k for this?". My personal thought is, "Alright, Honda, you tried (sorta), now I can make it better myself".

My primary dislikes of this scooter are the underpowered OEM engine, a weak rear suspension shock, sacrifice of storage for aesthetics, and poor drum braking system. While it's not woefully lacking in these areas, it certainly has room for much-needed improvement.

Straight from the showroom, it will achieve a top speed of around 35mph within about 12.5 seconds on flat straightaways... a little faster for light riders of about 150lbs or less, topping out at around 40mph; and slower for heavy riders of 200lbs+, perhaps as low as 30mph.

On moderate hill climbs, speed can drop down to the low 20mph's. My disclaimer... these speeds are roughly typical of ALL 50cc scooters with original parts. 50cc scooters are not manufactured to be speed demons. They're built to be efficient, cost effective commuter vehicles.

Rough roads will cause increased loss of handling (greater at higher speeds), as the feeble shock may bounce the rider and scooter about unsafely. Above all, you will feel the road through the seat and factory suspension, and long rides on bumpy roads will cause fatigue and soreness.

Storage space, simply put, is none-existent on the 2010 Ruckus 50cc. There is no storage compartment found on the factory-made scooter, though there is a minimal lockable bolt for the helmet.

This leaves the Ruckus, and its rider, at a disadvantage where practical use is concerned. This also hinders the rider from storing basic tools with the scooter itself, which is a risky venture when away from home.

The front and rear drum braking system lacks stopping power, even more so when the Ruckus is carrying greater weights. Braking from cruising speeds to a complete stop can be precariously long, making it necessary for the rider to consistently assess stopping distances (and defensive driving maneuvers) where stop-and-go traffic is a reality.

This can make the 2010 Ruckus unsafe to speed along through busy streets where obstacles (and pedestrians) can appear suddenly in the path of travel.

Last, there is no fuel gauge in place from the factory, no faring or windshield to reduce wind resistance or buffeting, a not-so-ergonomic wide handlebar, and the factory tires lack solid traction when cornering at moderate speeds and while on wet or debris-strewn roads.

Now, that was a rough introduction review to the 2010 Honda Ruckus 50cc scooter. Alas, here is the ray of hope found within what I actually do like about this scooter.

The engine is one of the best built 50cc's in the industry. It's quite solid and should last years when well maintained. Use only premium gas and top-grade oil and fluids for this scooter.

It will outlast countless other scooter engines found on less expensive Chinese and Italian-made scooters. Furthermore, it's fairly easy to maintain, upgrade, and replace parts on the 2010 Ruckus. Even novice mechanics can do important tasks on this scooter. Parts and services manuals are readily available, unlike many other manufacturers.

The frame, too, is rock solid. Factory rims are hearty and resilient, the seat is durable and UV resistant, factory headlamps are bright and project well, battery and ignition are durable and long-lasting, hand throttle is fluid and responsive, auto-ignition comes comes standard along with a smooth kickstart, and the rust-inhibited factory exhaust system purges clean and quiet as well.

Best of all, it's a street-legal vehicle requiring only a class-C drivers license, and no motorcycle license (in most states), to operate. It achieves about 100 mile per gallon with a 1.3 gallon fuel tank, roughly 130 miles per fill-up. Furthermore, auto insurance is quite inexpensive for scooters.

Most importantly, to me anyway, is the ability to "tune" the 2010 Honda Ruckus with after-market upgrades, ranging from cosmetic enhancements to engine improvements, wherein a speed gain of close to 50mph may be achieved. With a few hundred dollars, parts and kits may be installed to improve overall performance and functionality.

Two of the least costly, and easiest to do, I feel are also the most important... replacing the weak rear shock and adding underseat storage. I consider this essential for operating the Ruckus 50cc safely and effectively enough for routine use.

Other worthwhile projects may include replacing the drum brakes with a disc brake system, replacing factory tires with quality street tires, upgrading the variator for speed gain, a new framebrace with extended footpegs in place of the footboard, a new performance carburetor if desired, an add-on fuel gauge.

The availability of performance parts for the Honda Ruckus is broad and easily accessible from many vendors, which makes this scooter one of the most popular and easily upgradeable scooters on the market.

To sum it all up, the factory release of the 2010 Honda Ruckus 50 scooter is somewhat lack-luster and, at most, underpowered and minimalist scooter. However, some basic inexpensive upgrades can improve performance.

At higher investment, the Ruckus may be (and often is) the scooter of choice for "tuner" scooters, offering a wide variety of enhancements that can craft this two-wheeler into a true road gem that should last many years.