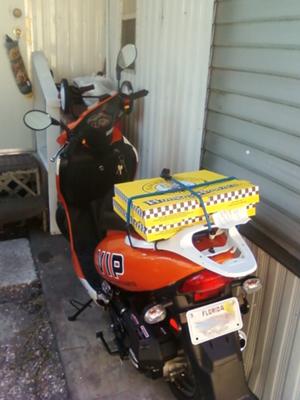 Yes, the toppings were intact. 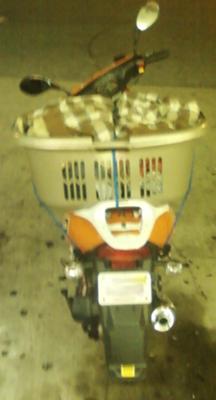 about 30lbs of wet clothes from the laundromat transported 3 miles home. 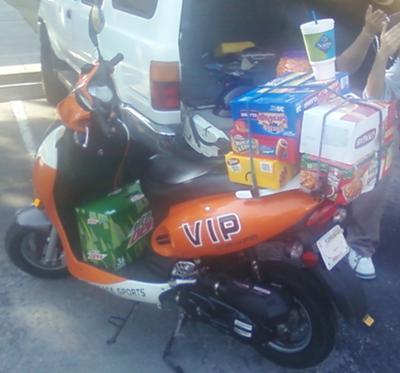 Greatest feat of all: $70 worth of food, strapped down by three bungee cords and transported nearly 10 miles.

Here is my review of my 2009 Peace Sports VIP Future Champion 49cc (Bash) scooter... While there is extensive debate towards the quality of these inexpensive scooters, I have found my VIP to be a reliable scooter and will feel bad when I sell it for a motorcycle.

I purchased it from a relatively new dealer literally across the street from my house for $699 with 0.2 miles on it. While I understand the risks in purchasing a scooter from a dealer with no reputation, I also understand that being the warranty was only good for 30 days both at that dealer and at other dealers, I might as well save $200 by getting it from the lowest "bidder."

First impressions of it were that of skepticism. I have read and heard countless allegations of them being built with inferior parts and labor, and even metal but I have yet to see proof that these things are too cheap to be a good deal.

I broke the engine in throughout the first 500 miles at varying speeds and not the "recommended" >25km/h the entire time because let's face it... I was going faster than that racing to the DMV to get a tag on it before 5 o' clock!*

There is a bit of a vibration noise when accelerating, but it does not seem to be a problem, and the other scoots of the same model seem to exhibit the same symptoms.

There is one problem that has arisen. Within the first 250 miles I would be sitting at a light and the scooter would be lurching forward. I sent the dealer an E-Mail and he told me to stop by and get an idle adjustment (he did it for free) and it ran fine after that.

Now at 1,000 miles (30 days later, lol) with the idle set to just under 1,000 rpm, it began running rough at lights and eventually downright stalled. The problem is new and from my research it may be either a bad coil or the consequence of using the kickstand on uneven ground and having it tip over while running, which would mean gas in the oil and a slow seize emerging.

So in conclusion, my Bash (which is the actual manufacturer, Peace Sports being the importer) has been a solid ride that can hold its own in a town where people race to the next stoplight.

I've developed little difference in my routes from my cycle commuting days, and it is a definite plus to not arrive to class sweaty.

There is ample under-seat storage to hold my flashlight, some tools, rags, and my helmet when not in use. However, I did remove the rear storage container to free up room for oversize objects and even a passenger weighing 250lbs (I weigh 240, so that's 490 lbs).

I will miss it, but a possible commute across the Tampa Bay, which is inaccessible by scooters and a virtual death wish by bicycle has prompted me to have to get something bigger.