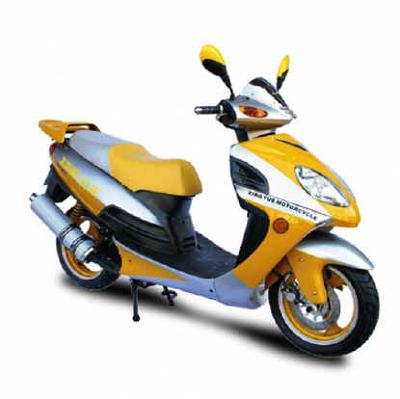 (not mine, but it's the same as mine)

Decided to go with a new, less-expensive scooter rather than a motorcycle as my "beginner" biker, since a) I wanted something new that only I had ridden, so if something bad happened I knew it was my fault, and b) if I didn't like riding I wouldn't feel bad since it didn't cost me too much to try it.

Found a new one being sold by a motorcycle shop that shipped in Chinese scooters in-bulk for cheap, assembled them, made sure they were good to go, then did a little mark-up for sale.

I was a bit hesitant to get a Chinese-made scooter, because folks online said the quality was hit or miss (mostly on the miss side). But, a few sites said if you go with Chinese-made, an Eagle or Eagle variant is a solid way to go.

Eagles are manufactured by the same Chinese company which has a higher quality control that some other Chinese companies. Can't quite remember the name, but I think it's Hyongang or something.

Anyways, the scooter works good, and has been very reliable. Only issue I've had with it is the some of the nuts/bolts weren't fully tightened when put together. I attribute this to the folks who assembled it here in the U.S., though, plus I should have taken the advice of some scooter riders and periodically checked/tightened the nuts/bolts.

After riding it for about 2000 miles, I started hearing this whiny chirping noise. I thought the engine was dying, but it still ran good. Turns out the nuts holding the muffler onto the engine were coming off.

One day the bike makes a huge farting noise as the o-ring exhaust gasket gets blasted out and caught in some plastic housing near the exhaust port on the engine. The bike was still rideable (home for repairs), but it was really loud like a Harley.

Turns out this is a common problem others have had with Chinese scoots, and I got an oval-shaped exhaust gasket which works much better, mounting it with some $0.50 nuts and lock washers I got from the local Home Depot.

I'm notorious for not checking the oil, so when it was time to change the oil I checked the dipstick and no oil was registering on it. I was scared that all the oil had gone out of it some how, and I was tearing up the engine. But when I changed the oil, quite a bit came out and it's still been running good. I'm just more careful to change the oil at 1000km and to check it every time I fill up.

Being a Chinese-made bike, it does have its inferiorities to, say, a Japanese or Korean bike. The screws used to hold the plastic paneling in place have started to rust after sitting in a couple of rain storms.

Some of the plastic paneling near where my feet meet the floor mat have broken their mounting clips from my feet inadvertently catching them. They stick out a little, nothing serious.

The horn on this scooter flat-out sucks. I've been researching upgrading it to either a car horn or a sebel horn.

The under-seat storage compartment can't hold a full-face helmet; had to get a large Givi rear-trunk to do that. The front ABS brake works good, but got a tad warped and squeaks a little sometimes (cheap metal I guess). It's just minor things. Overall it's a solid bike that I've so far put about ~3500+ miles on (4000km).

What I LIKE about the bike is that the "T" in the name stands for "turbo". The Eagle/Aquila (Spanish for "Eagle") have a larger engine. Most 150cc scooters range 8-8.5hp, but the Eagle T's are 9-9.5hp. That extra horse power DOES make a difference.

I regularly run the thing at 50mph down the road (to keep up with the ridiculous traffic where I live), and it can do so easily. It's very peppy off the line, which surprises some people who think I'm going to be putting away like the 50cc's do.

I get a can of Seafoam for about $10 at the local auto store and add a couple capfuls to the gas at each fill up in order to keep the carb clean and running great. People who ask me about the bike are amazed at how fast I can go and how much the total cost of getting it up and running (cost of bike, gear, license, etc) was, because it's ridiculously less expensive than even the cheapest new car.

Now, I got this scooter NEW for $800, when most folks were trying to charge $1200+ for their USED one. I can definitely say it's been a great deal monetary-wise. But, the part that I've liked the most is the riding. I've spent most of my life commuting using bicycles, so hopping on the scooter was like second-nature. But, riding the scooter is more entertaining than a car. For the week my scoot was out of commission while I was waiting for the new exhaust gasket (which cost $5 and shipped in a regular-sized envelope LOL!), I was pretty down since I had to take my car to work. But once I got my scoot up and going, it just makes me happy again. I look forward to the trip to and from work.

Only other issue I have with it is that it's not highway-capable, at least not for the 70+mph traffic on the highways around here. The scoot gets batted around by winds too easily. I've been wanting to get a bigger/better scoot, like a Honda Silverwing, but I told myself I'd run this one a while first to get my money's worth before moving on.

It's just annoying having to keep a car around for highway travel (and bad weather travel). I'd much prefer a scoot that could do highway, so I could do some minimalist road trips.