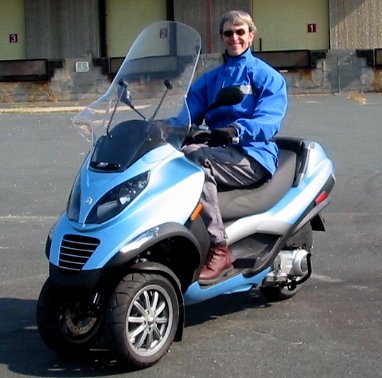 Here is my Piaggio MP3 scooter review... Background which informs the following comments: I've ridden bicycles since I was a child. I've driven cars, manual and automatic, for over twenty years (yeah, I know, big deal). Before last summer, I had never driven anything with a motor and less than four wheels, so it was all new to me then.

Riding a cycle or scooter is both very familiar and utterly alien to my bicycling nature. On my bike, I sit more-or-less upright, legs extending down; lean forwards into the handlebars; balance, pedal and steer. It's how I imagine riding the world's lightest thinnest laziest horse might work. Given I'm 6'5" and 160lbs, we're well matched, at least in the light-and-thin dimensions.

The Piaggio MP3 250 is an entirely different animal. One realm is posture. The seat is only about 18" above the footbed, even though it's probably more like 24-28" above the actual ground. My feet aren't much further from the ground than they were on my bike, but the rest of me is much closer to both the ground and my feet than I'm used to sitting.

Second is center-of-gravity and mass distribution. I'm taller and more massive than my bike (naturally). By contrast, I'm about a third of the weight of my scooter, just a hair taller than it is long, and it's broader than I am. (Its body is a little over two feet from side to side, and I'm a little less.) I actually feel kind of tiny by comparison, even though I have one thing it really doesn't: height.

When I sit down on the scoot, I sit down, and the machine benevolently permits my presence: I'm sure as heck not bulky enough to disturb it if it doesn't feel like going anywhere. God forbid any part of me ever gets stuck between it and unchecked gravity.

As for my anthropomorphic-but-like-animals tendencies, it stands up more or less by itself when at rest (if you tell it to). When you turn the throttle towards you, it goes and you take over balance.

When you turn the throttle a little more, it goes. (You've got control of mass and momentum in a way that you don't ever have in a car, because THE CAR EATS YOU when you drive one. The MP3, on the other hand, is a barrel-chested little marvel of modern engineering that you ride on, not in.)

I could be all pop-culture-referential and say I imagine it's like riding a worg or Battle Cat, but it's not. It's long and kinda squat, and neither wolves nor big cats usually get the "squat" adjective.

A bike is a lazy horse to me, but my scoot is much more like riding a post-apocalyptic super-mutant armored wiener dog with an utterly compliant disposition.

I'm sure it's possible to make it lose its traction in good conditions, but I will also say that you'd have to work at it. "Ridiculously sure-footed" would be apt, even though I've hardly tried to test it. But with the center of gravity so low and so (relatively) well-supported by the triangular wheelbase, even as an utter novice I feel I can ask it to maneuver pretty radically without much fear of falling over.

The 50cc two-wheelers I tried before riding the MP3 are superficially comparable, but not in depth - because the third wheel, extra mass, and the bigger engine that drive it make a huge difference. As I discovered later when I took the MSF course, it weaves and slaloms with unreal amounts of stability, and you can lean over in a 15mph+ turn to remarkable degrees and still feel very stable. It's a very confidence-inspiring design for a new rider.

Since acquiring it last July, I have ridden nearly every week, even through this Minnesota winter. I sold my car to buy my MP3, and it's been more fun than any car I have ever owned. An $8000 scooter sounds like a lot of money, but compared to a new car it's a pittance.

Between the scooter's storage and either a backpack or my new topcase, I get a week's worth of groceries with room to spare. I have ridden highways at 70+ mph. I have ridden carefully on icy and less-than-perfectly-plowed snowy roads (with winter tires) and have not fallen.

I have ridden in temperatures down in the xºF, well below freezing, and my scooter has not failed me. It's as close as I can imagine to a year-round scooter, and though there is weather in which I will not ride - for nearly all other times, when I need to go, my Piaggio MP3 gets me there, and I have a great ride.